Lively discussion on CRISPR-Cas in animals

On 21 June 2019, the Dutch Council on Animal Affairs (Raad voor Dierenaangelegenheden, RDA) and the Commission on Genetic Modification (COGEM) organised a hearing on gene editing in animals. The RDA presented its draft opinion on this topic and invited the audience to comment. "The purpose of this meeting is for you to advise us on our advisory letter to the Minister", said Marjan Slob (RDA, Publicist, influencer), who chaired the meeting. 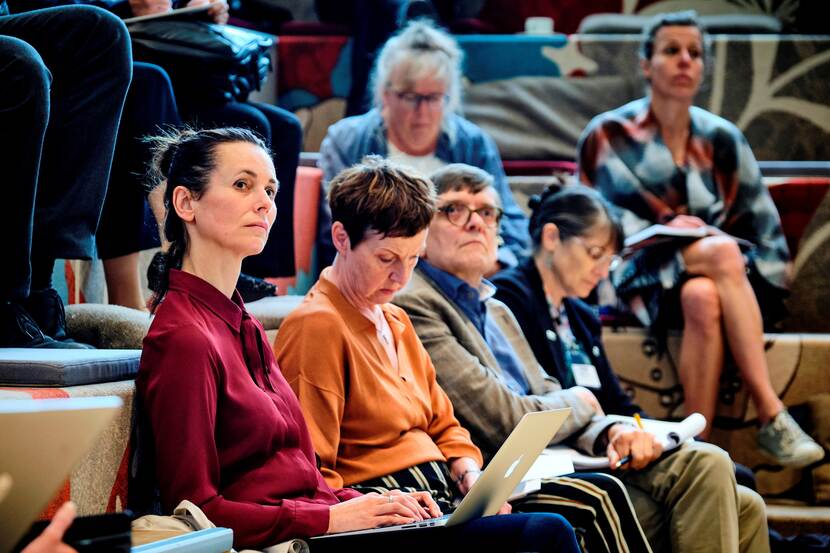 CRISPR-Cas was the ‘breakthrough of the year’ in 2015. The advent of this gene editing technique presents challenges to policy and society. For instance, DNA changes made with CRISPR-Cas are difficult or impossible to detect and distinguish from naturally occurring mutations. COGEM reviewed the latest developments, technical challenges, and ethical and societal questions in its 2018 policy report ‘CRISPR & Animals: Implications of genome editing for policy and society’.

No objections to genetically modifying animals?

The RDA has developed further advice for the government regarding CRISPR-Cas in animals. Professor Martien Groenen (RDA, Wageningen University) presented a draft version of the RDA advice. "CRISPR-Cas applications may benefit or harm the animals concerned. It can be a powerful tool and may be a game changer for some traits, but there are several caveats to the application of gene editing in livestock", he said. Groenen discussed several important aspects that the RDA working group on gene editing has recently considered. He posed a question to the audience:

"For me, there is no principal ethical difference between altering animals by means of traditional breeding or by gene editing techniques. Therefore, I have no objections to genetically modifying animals, provided that this modification is sincerely in the interest of the animals concerned. Is there something I miss in taking this stance?"

The hearing, which was organised as a side event at the 2019 CrisprCon event, also featured presentations of Dr. Sjaak Swart (COGEM, University of Groningen) and Professor Phil Macnaghten (‘Just editing’ project WUR / FD). Swart discussed the implications of gene editing for policy and society, including basic features of Dutch legislation. He stressed the importance of public dialogue. His question to the audience was:

“How can we prevent that gene editing applications aimed at welfare improvements will lead to further instrumentalization and objectification of animals?”

Macnaghten presented the ‘Just editing’ project which aims to develop a responsible innovation approach to animal gene editing. The project includes multiple partners, including several breeding companies. They are jointly developing new lines of questioning on responsibility, aligned with public concerns (e.g., who is responsible?) His question to the audience:

“Coming October, my group will launch a public dialogue on the welfare of GM-animals. Such a dialogue has never been held before. What, according to you, are crucial points in structuring and contextualizing such a dialogue?”

There was ample time for a lively discussion about these questions between the speakers and the audience, which consisted of influencers, scientists, animal rights advocates, and other stakeholders. We will summarize the discussion in a meeting report that will be published on the website of the RDA and COGEM. The results of the meeting will be used for the definite advice to the ministers involved.